‘the unreliablity of human recollection’

For this project with the Petrie museum in London I decided to explore Petrie’s relative dating method known as seriation or Artefact Sequencing. I was inspired by the idea that design elements in pottery evolve and change suggesting a chronological order. It reminds me of the creative process involved in making. Using polystyrene cups I initially made a collection of assembled objects based on various design elements used in Seriation, adding elements such as handles, feet and pointed bases. Plaster moulds were made of these objects from which the first series of cups were cast in red earthenware. I allowed any alterations, translations or misinterpretations to naturally evolve. This became a continuous process, and the collection slowly changed as it grew, paralleling my own creative process and development of ideas. 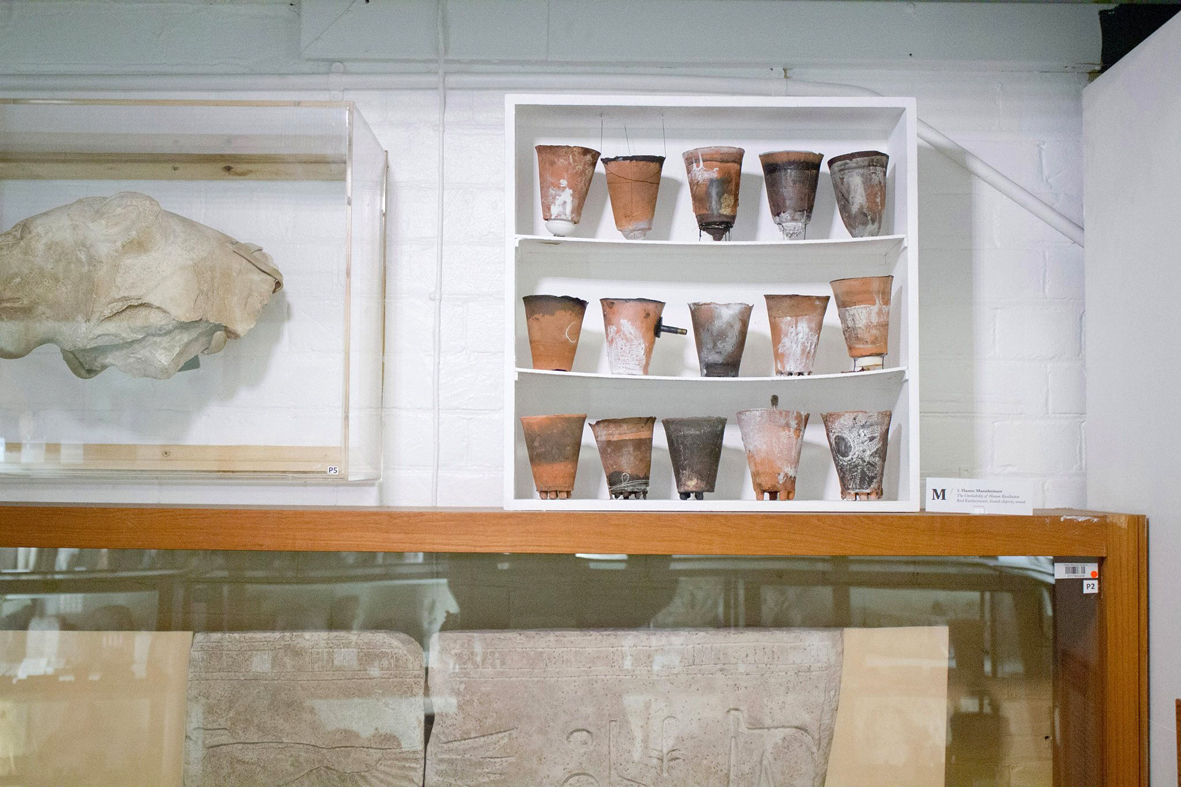 ‘the unreliablity of human recollection’ 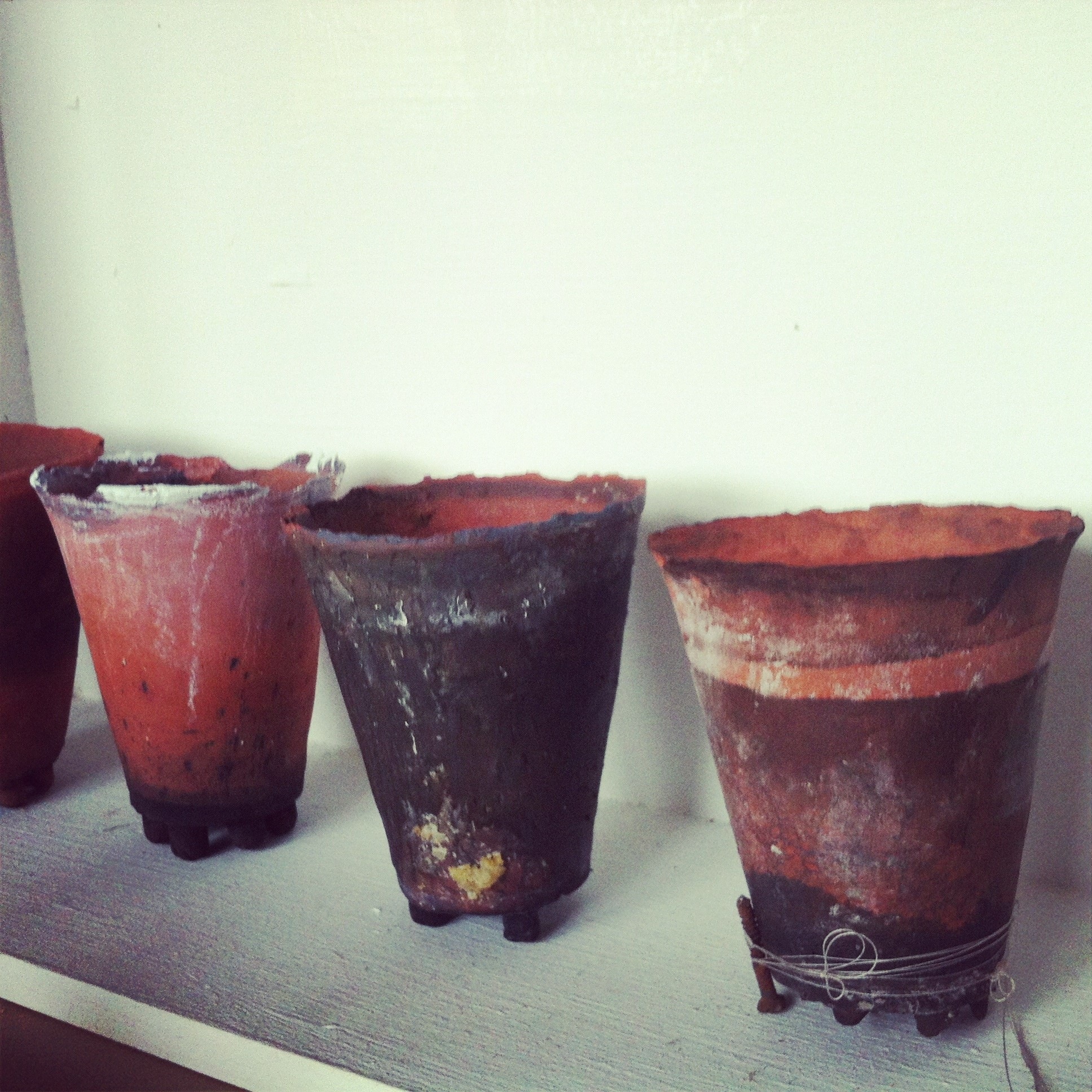 ‘the unreliablity of human recollection’, detail 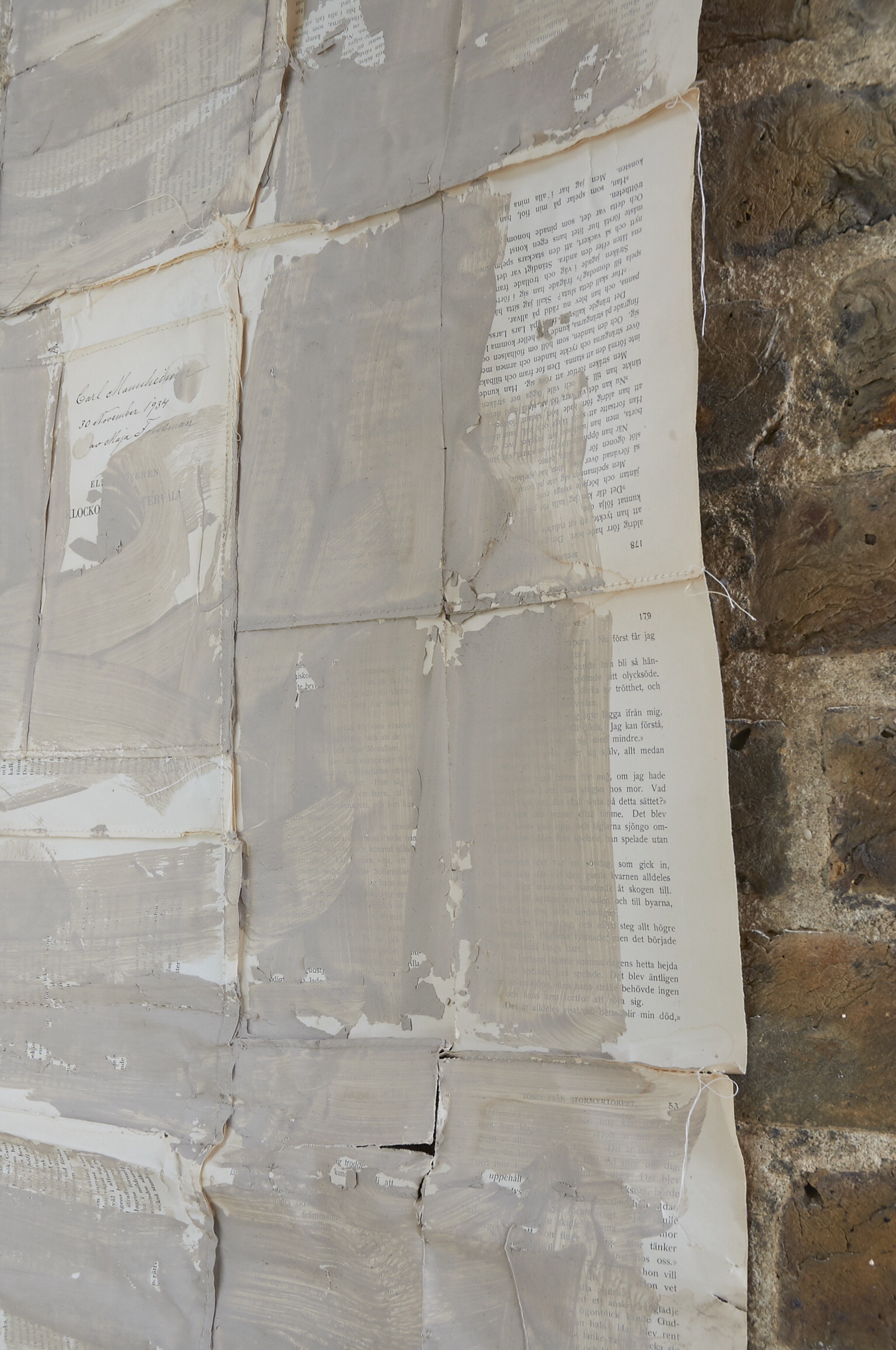 Photo by Joanne Underhill. This was a piece made in response to Manifold project at Siobhan Davies Dance studio in London. During the time of the residency I spent time clearing out what was my mother’s house. I come from a family of book readers, a lot of the time was spent looking through books, some of them very old and beautiful.” I stitched and collaged the pages of these books, reminiscent of a patchwork quilt including postcards and notes found in the books to create a canvas to paint onto. Using unfired clay as pigment the pages have been painted with a faint shade of grey buff, exploring the impermanence of the dry and brittle stages of clay. 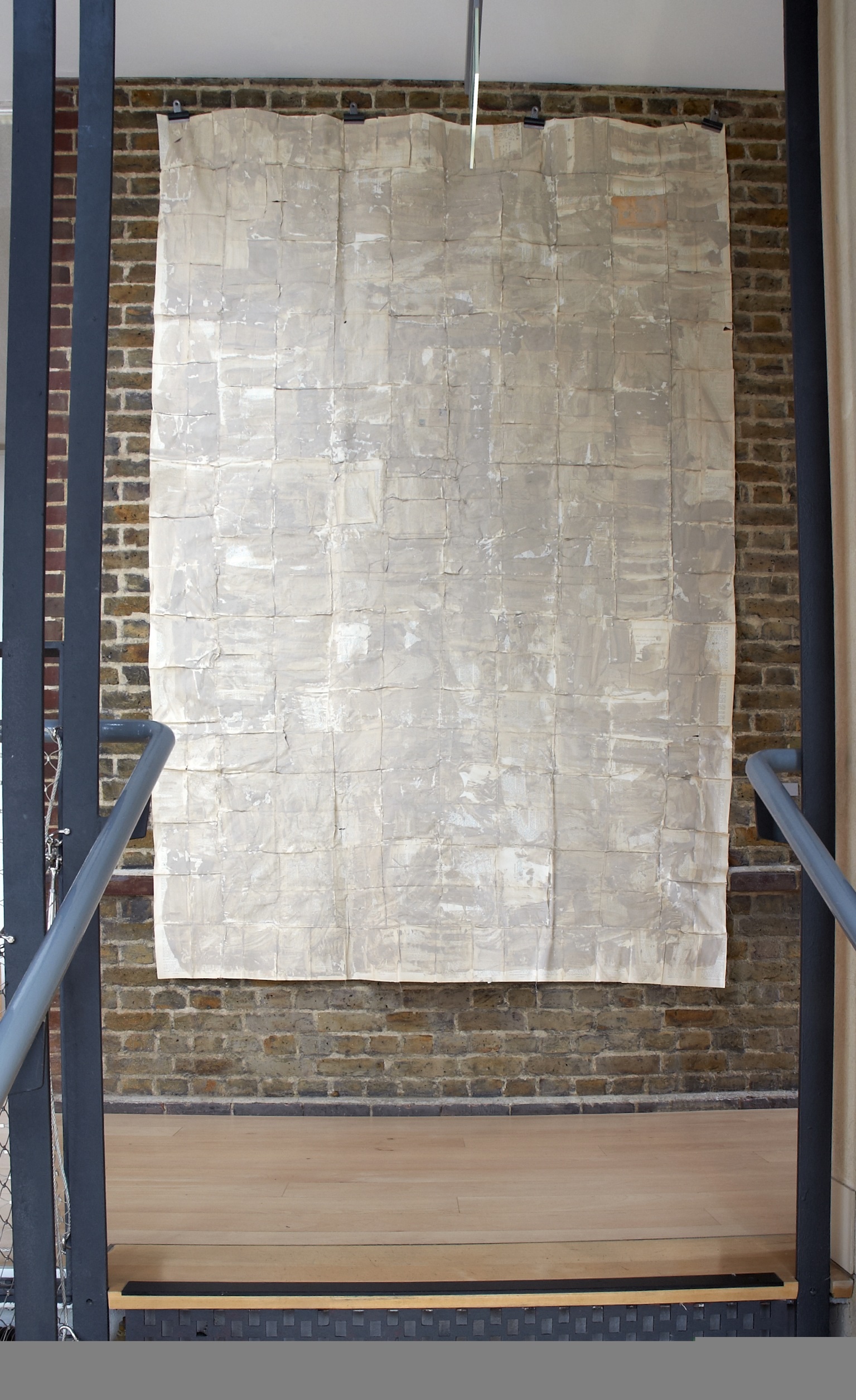 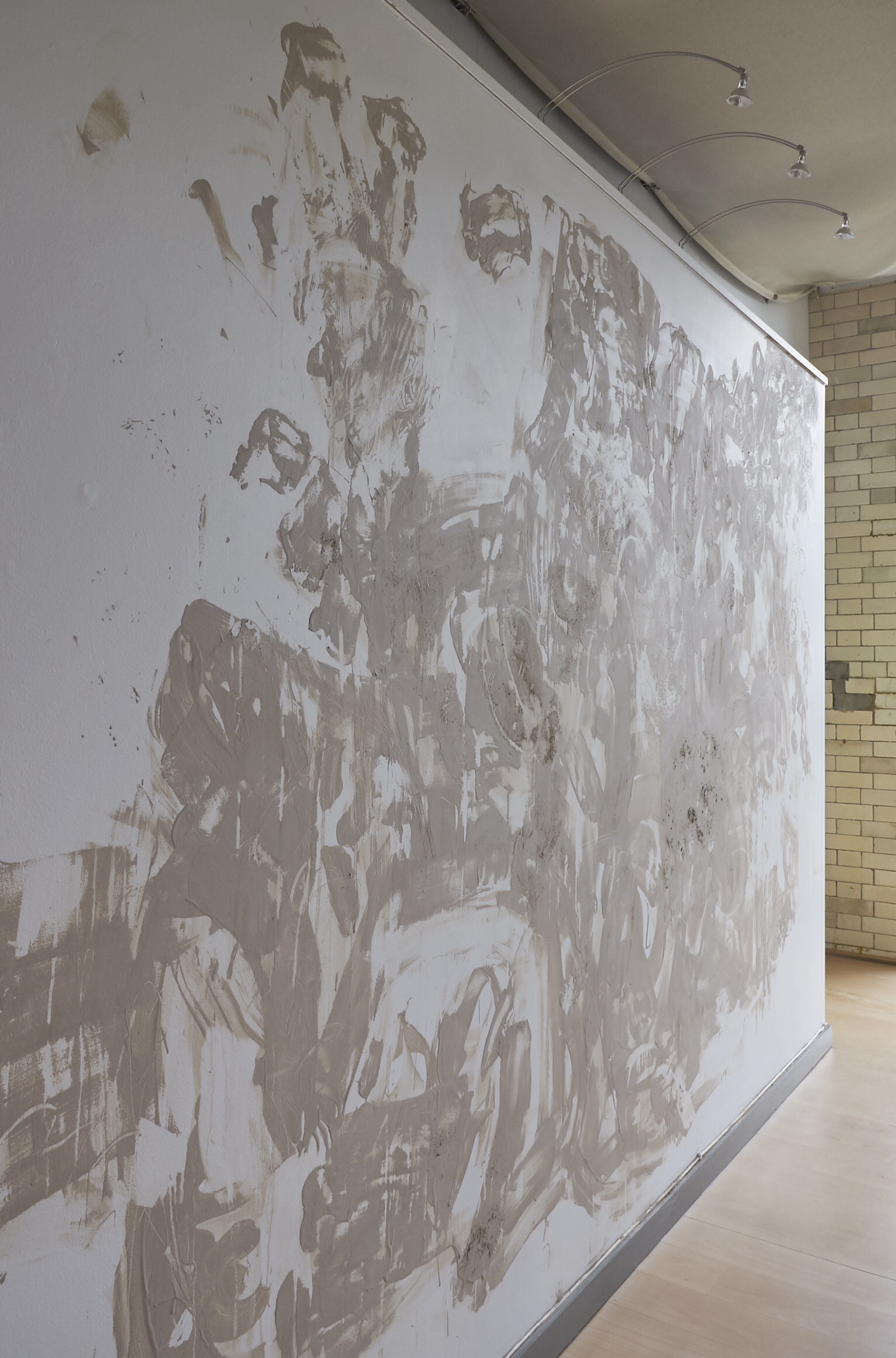 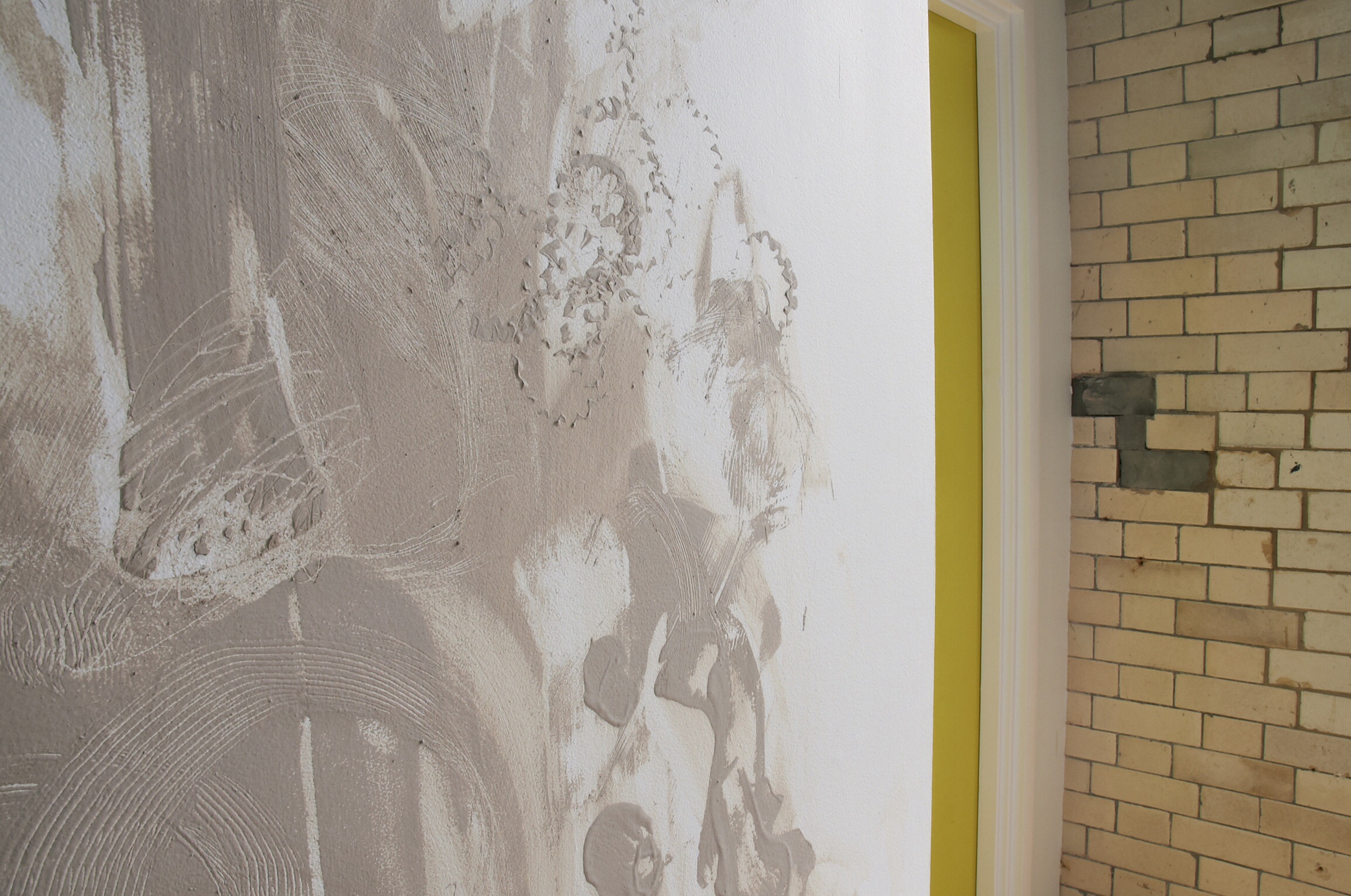 Photos by Joanne Underhill. For the end of the residency I made work responding to the space and Manifolds time at studios which were all exhibited in ‘Unfold’. I wanted to develop my experience in small mark making and explore large gestures in drawing. Concentrating on the process I painted clay slip directly onto one of the walls at Siobhan Davies Studios. Large mark making demands an entirely different approach and physicality. It was interesting and quite challenging to bring my practice out of the studio and into a more public space where both the building and the people in it become part of the creative process. 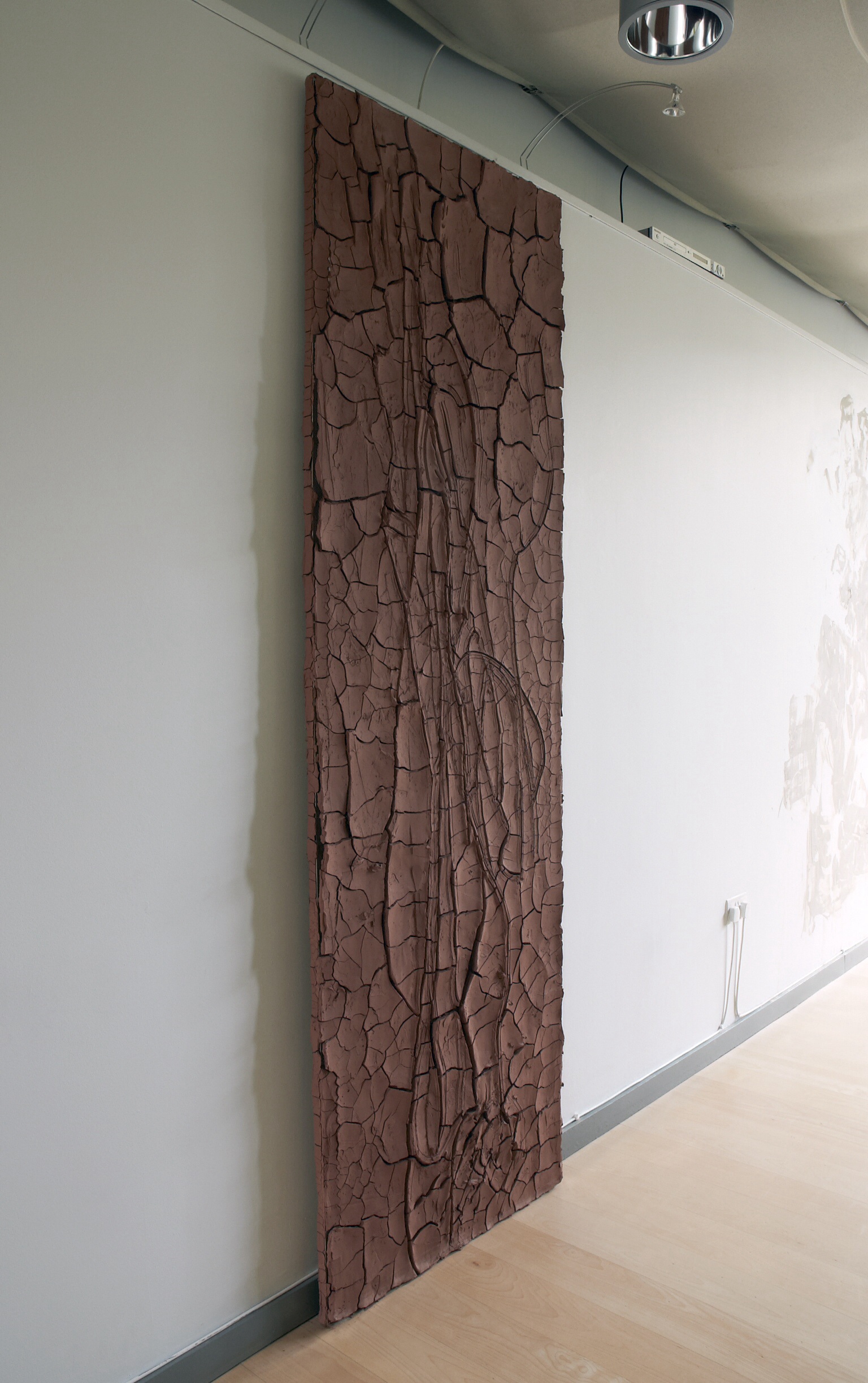 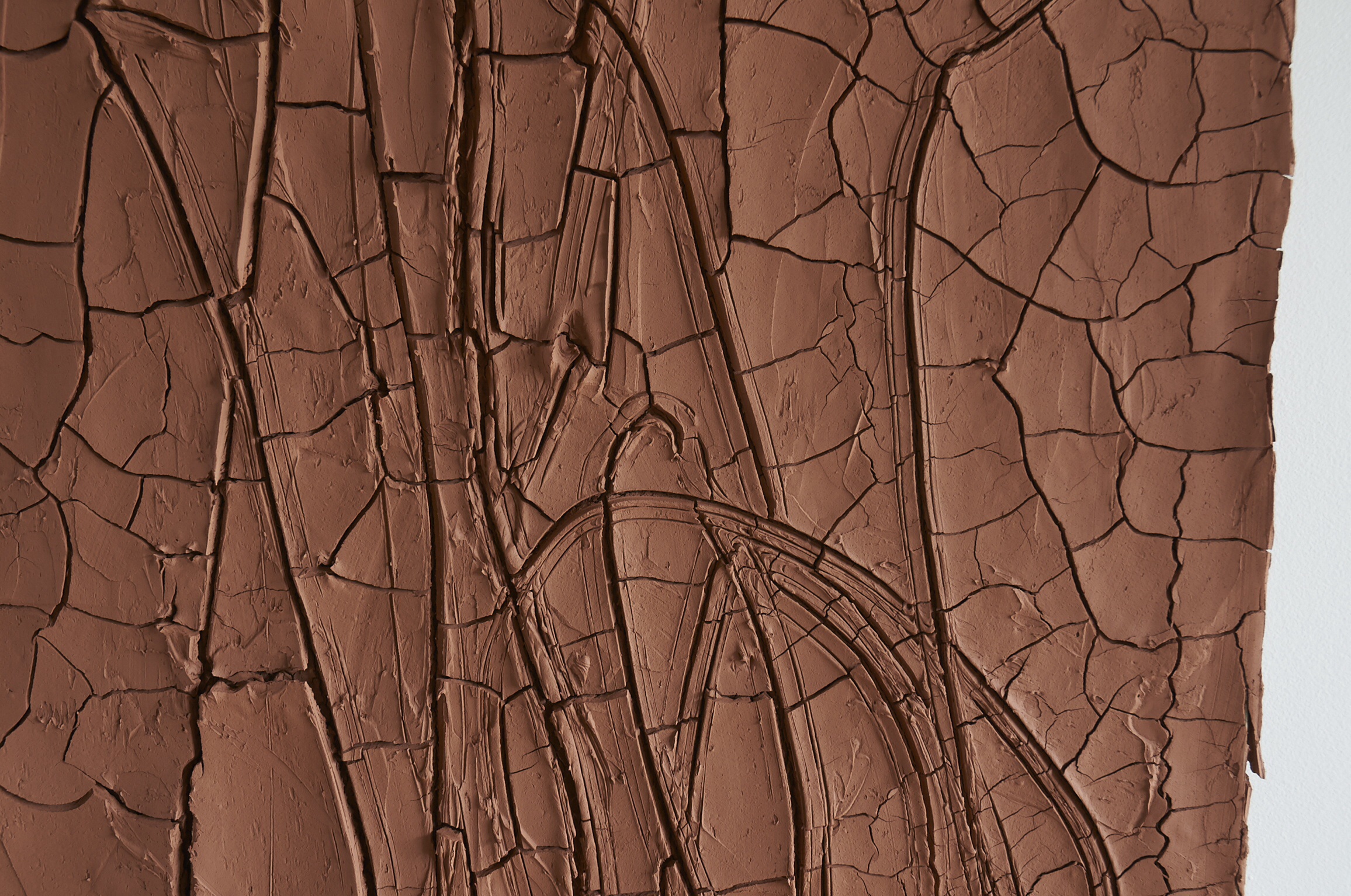 Photos by Joanne Underhill. Inspired by the architectural archaeology, apparent in the original walls of the studio, bearing traces and memories of the building’s previous life. I made a raw clay piece, which had impressions, marks and dents. Using the format of lining paper, which I have often used for drawing exercises in the past, this work is about exploring line and the material qualities of unfired clay as it dries and changes. 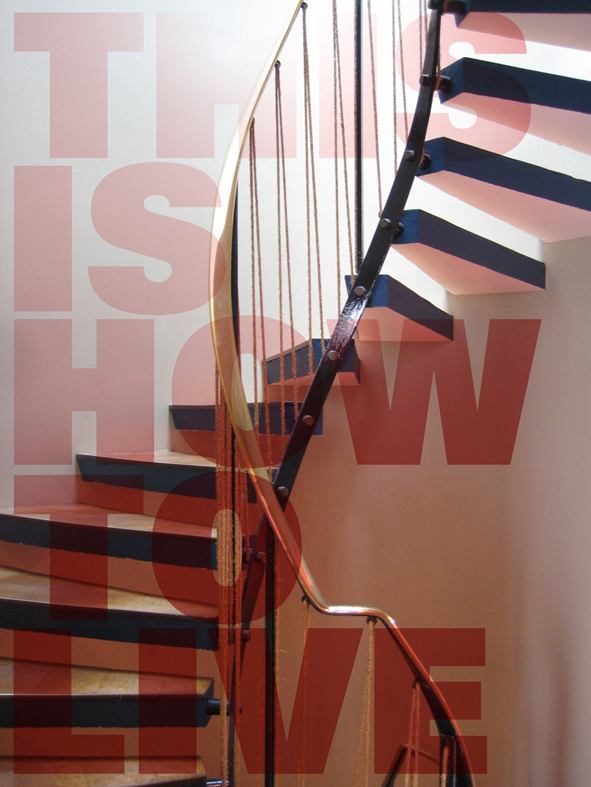 ‘this is how to live’

This was a Manifold project in collaboration with National Trust where the artists all made work in response to two National Trust properties: 2 Willow Road – the home of Erno Goldfinger and William Morris’ Red House. 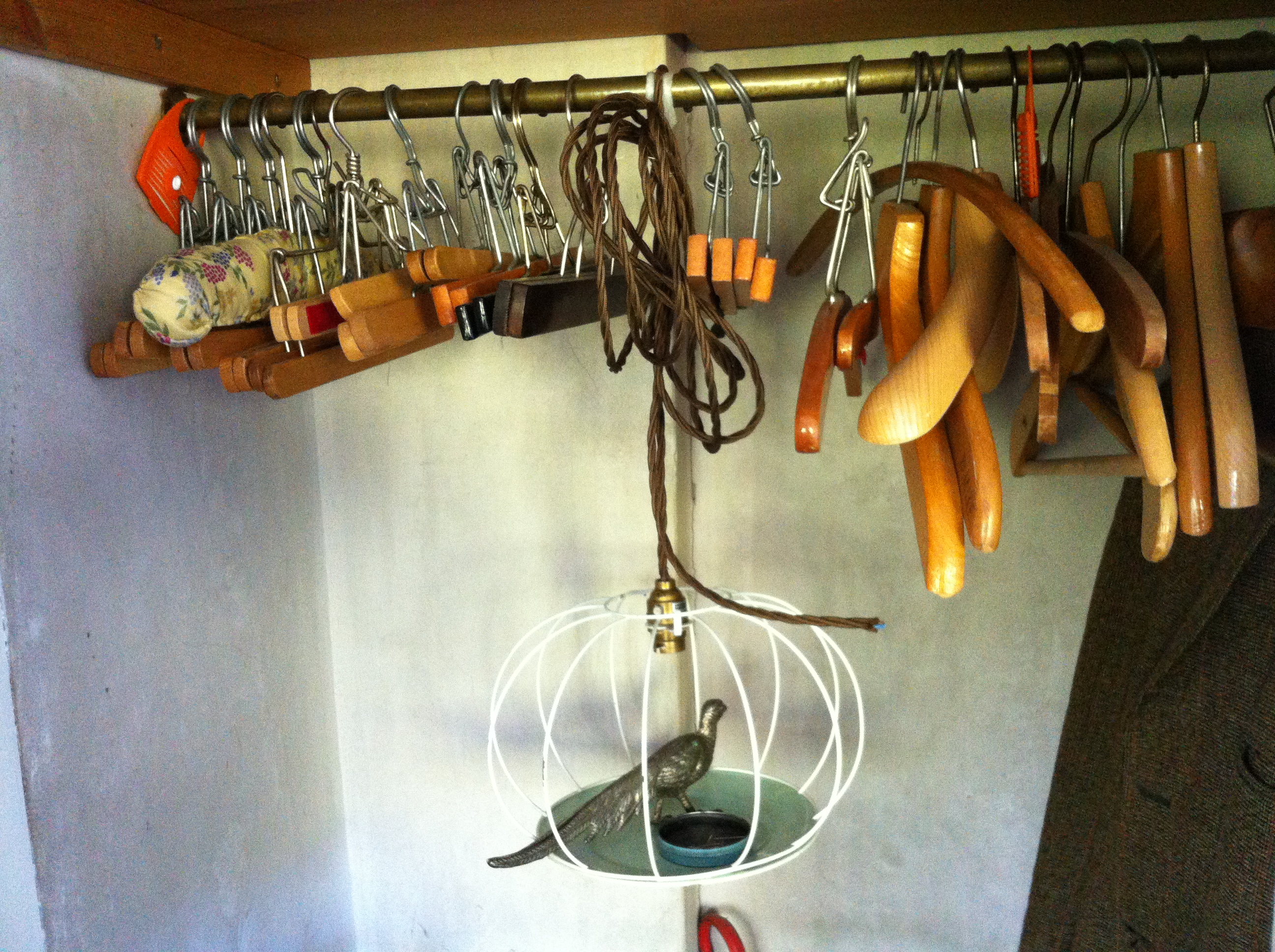 I made a collection of sculptural objects using surrealist devices to those used in the house. Inspired by the emphasis on framing openings and the collecting and displaying of objects. The juxtaposing and assembling makes the familiar strange or the worthless precious. Recognisable objects have been put together to suggest a new function or use, perhaps a story – the kind you make up playing at bath time just before bed. Working with the room as my canvas I wanted to create clusters of objects, almost like still lives. 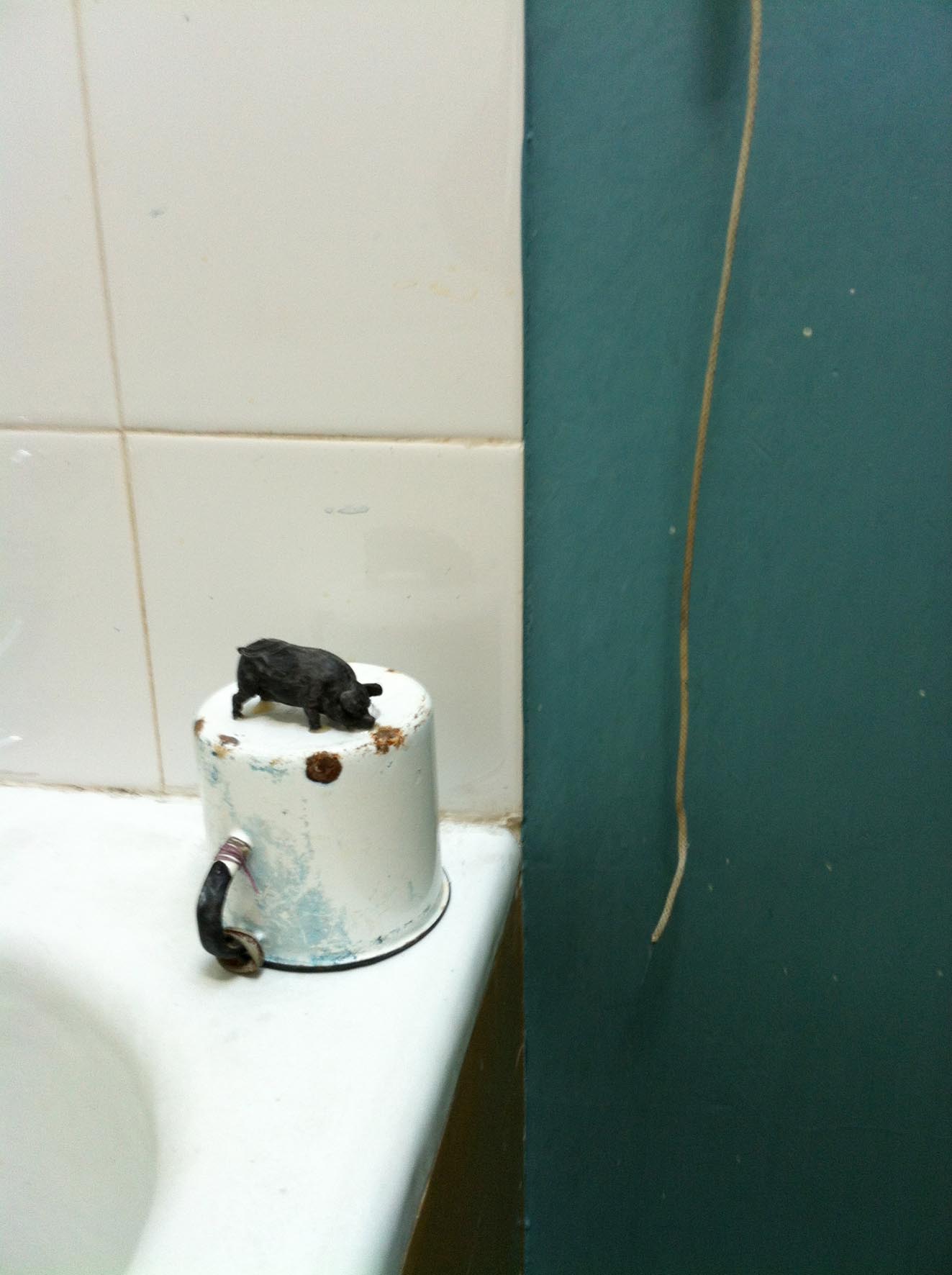 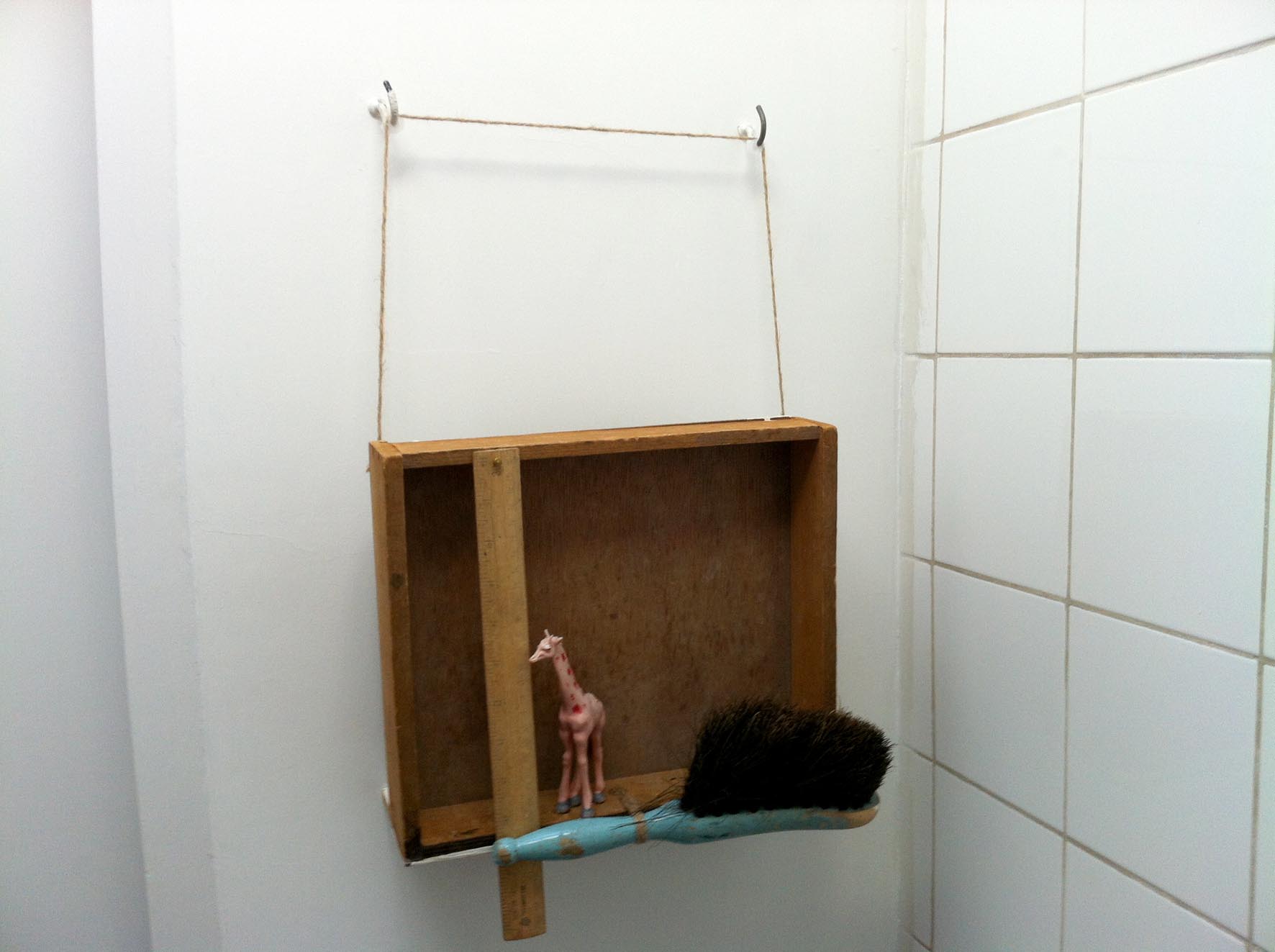 ‘little combine series – how tall am i?’ 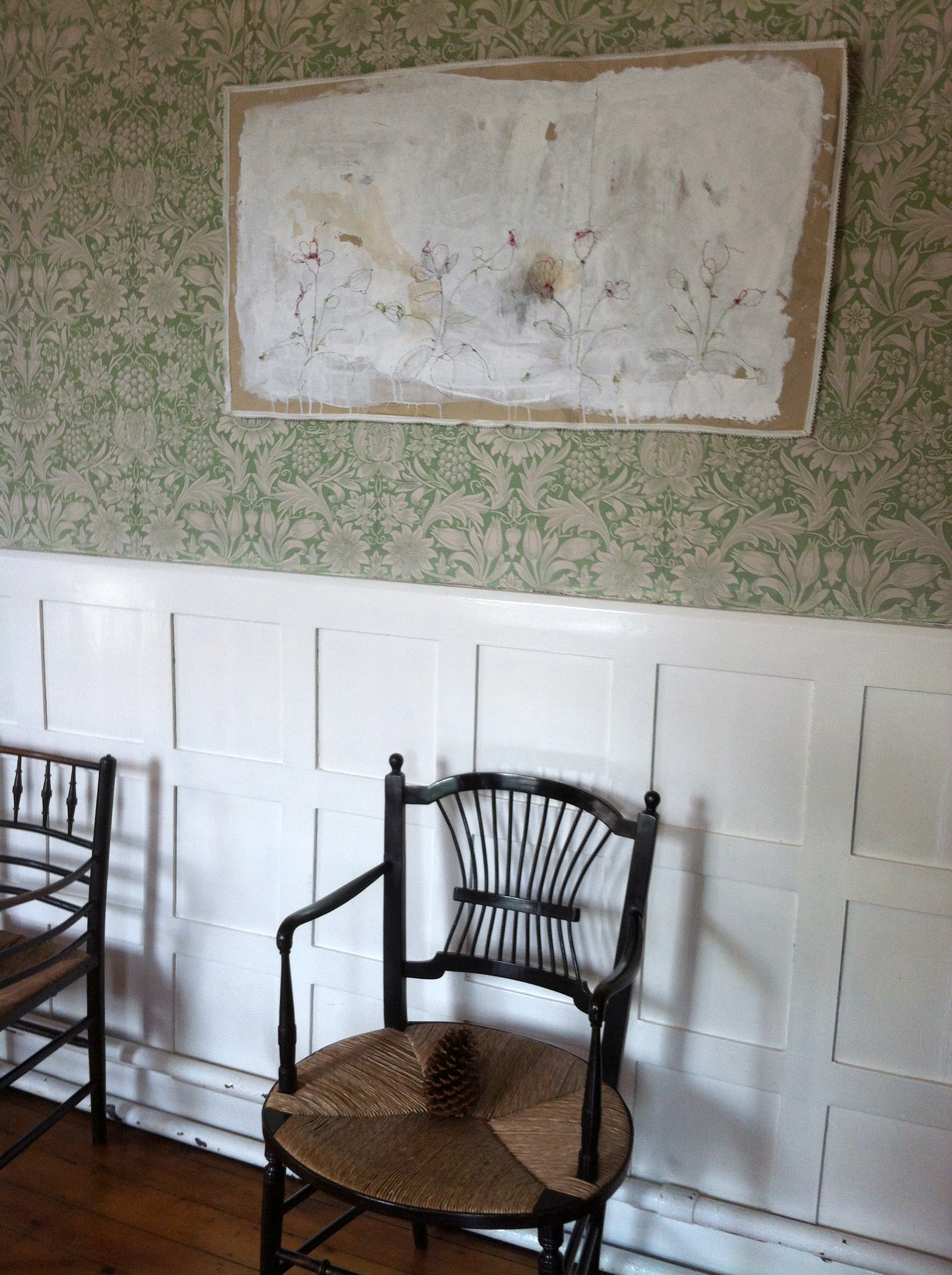 William Morris was an artist and new projects were constantly being started at Red House. Traces of the creative process are still evident around the house. The part painted cupboard in the hallway or the embroidered tapestry in the dining room, which was used as a studio. I find the process of making the most interesting and exciting. I created wall hangings, drawings with sewn details that are inspired by Morris’ floral wallpaper designs and the gardens of the house. 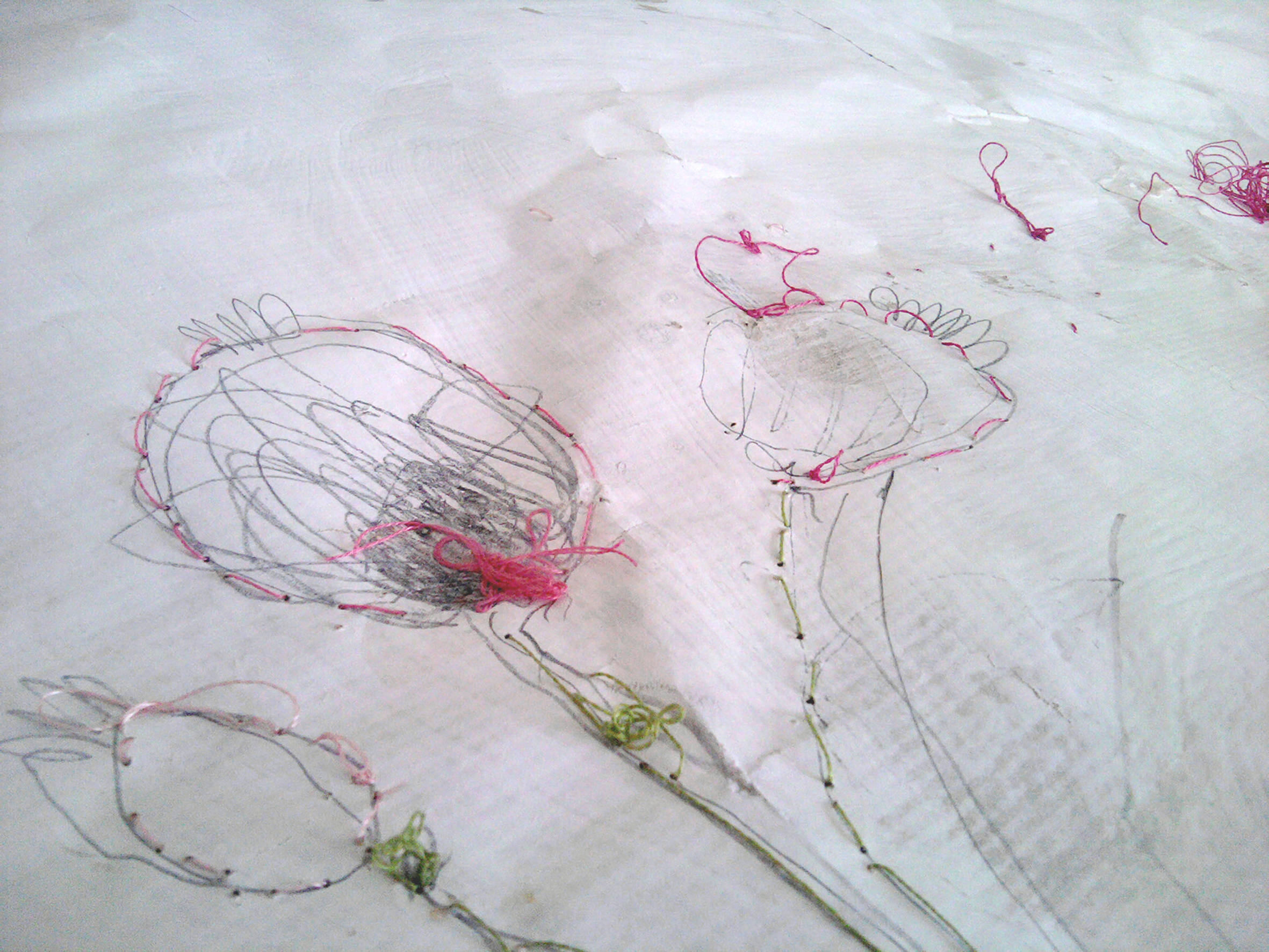 ‘untitled (flora and fauna) I’ 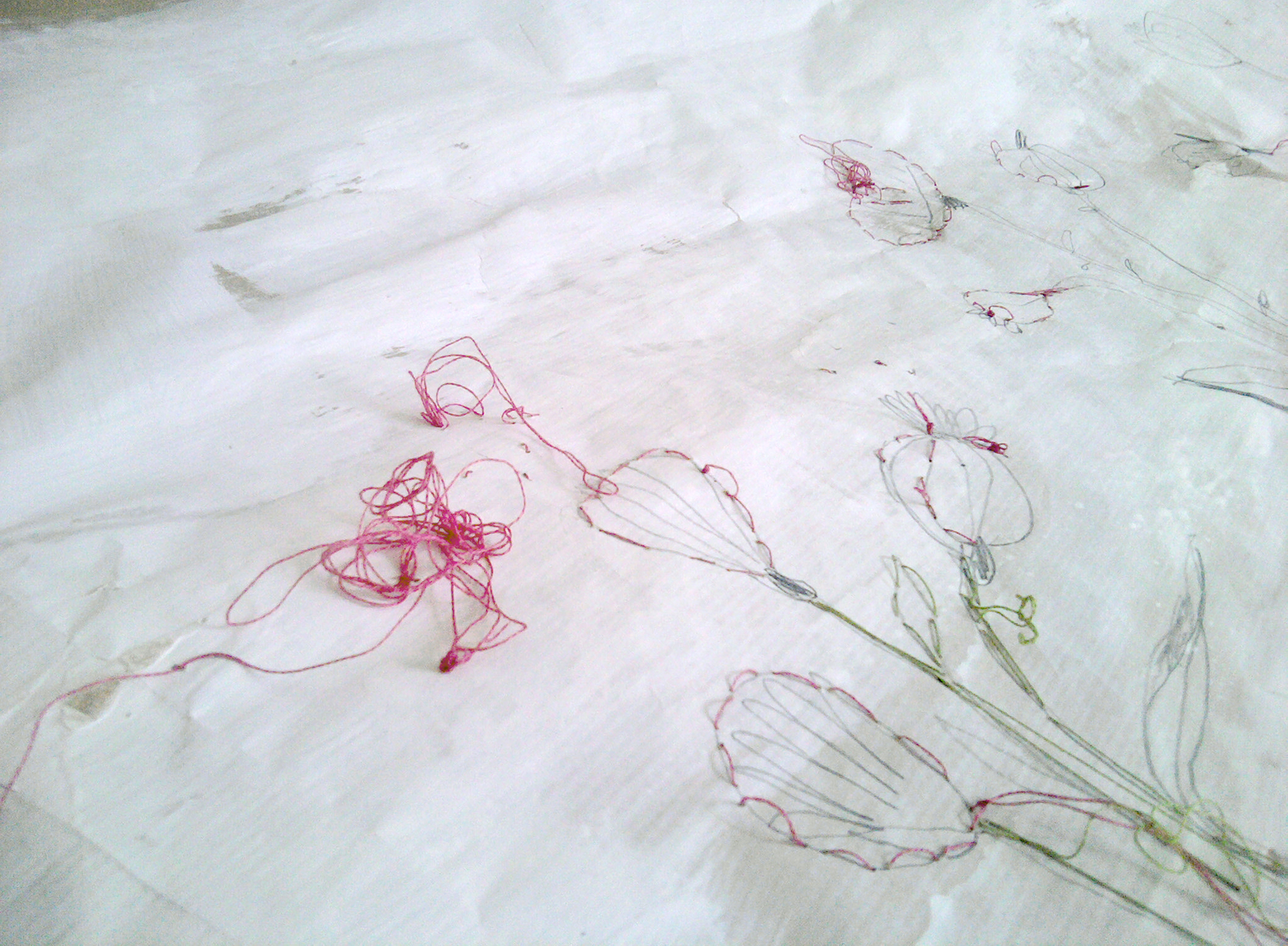 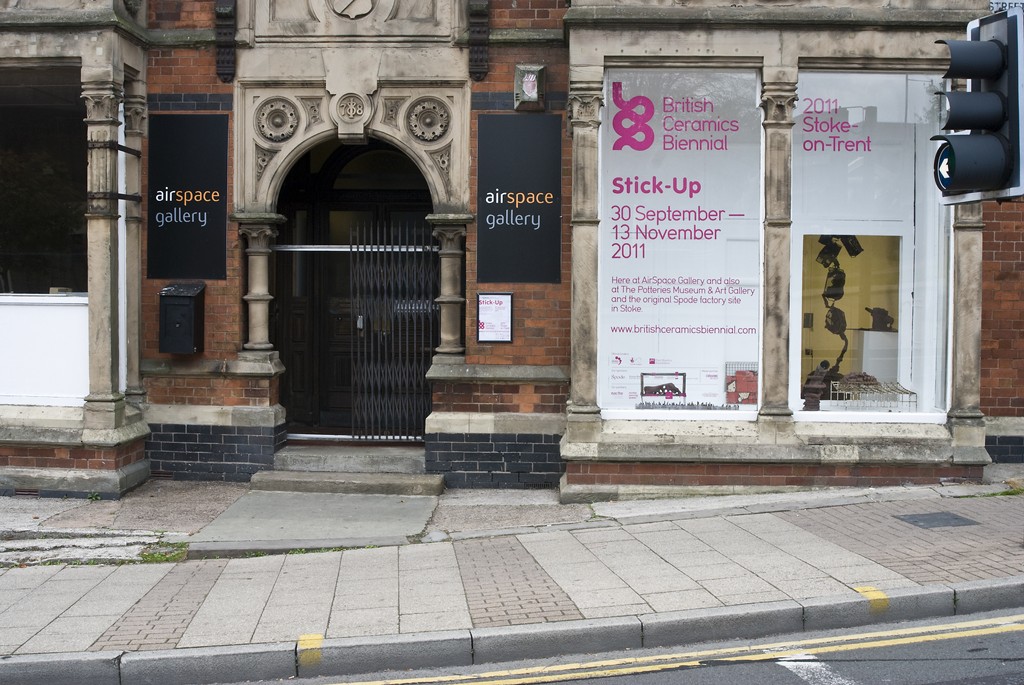 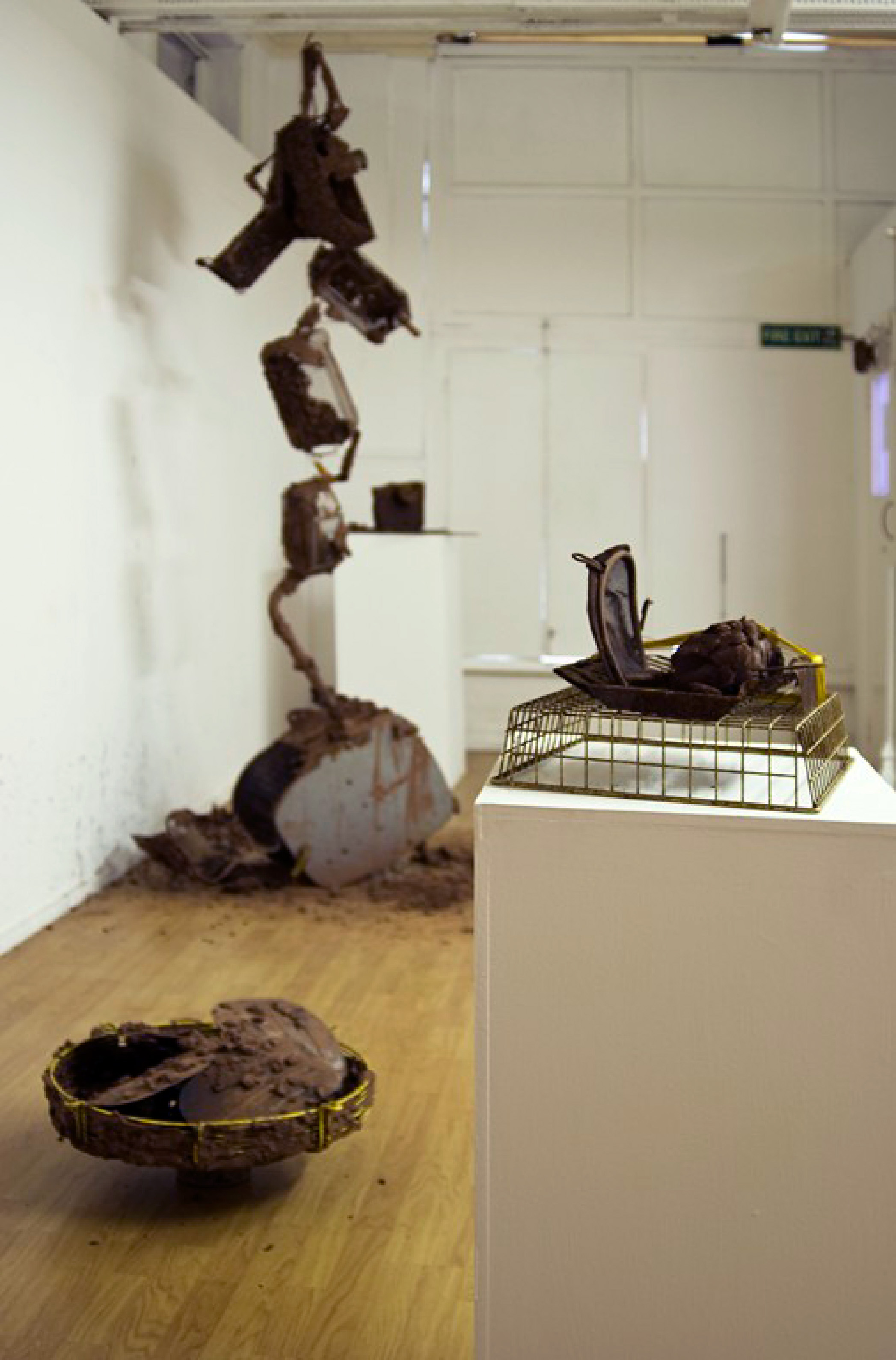 This was a project and exhibition Studio Manifold did in collaboration with another artist collective at Airspace Gallery in Stoke. We each worked with another artist in the other collective, I worked together with artist Andrew Branscombe creating some new exciting work. I was really inspired by my visit to the old Spode factory, with things just left, broken and covered in dust. It made me want to re-create these piles of plates and objects. 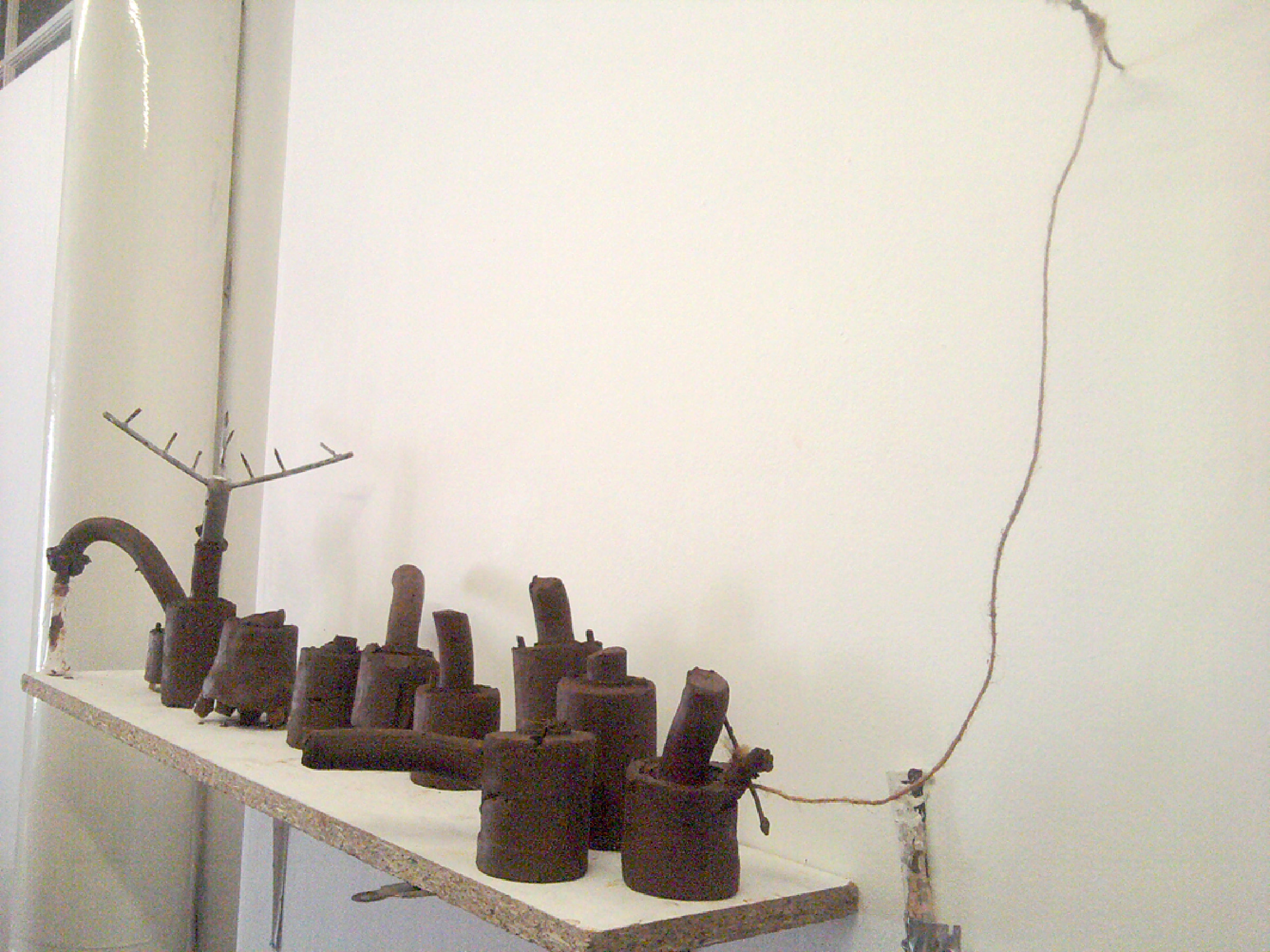 It was really interesting working with Andrew Branscombe who has a similar intuitive and experimental approach to me but a completely different background. He constructed a range of different tools or instruments based around ceramic processes such as jiga jollying, extruding and throwing. Often the function was obscure and somewhat flawed. Responding intuitively to his creations or additions I experimented making stacks or groups of clay objects allowing both the clay and the tools to limit or interfere with my interaction with the clay. 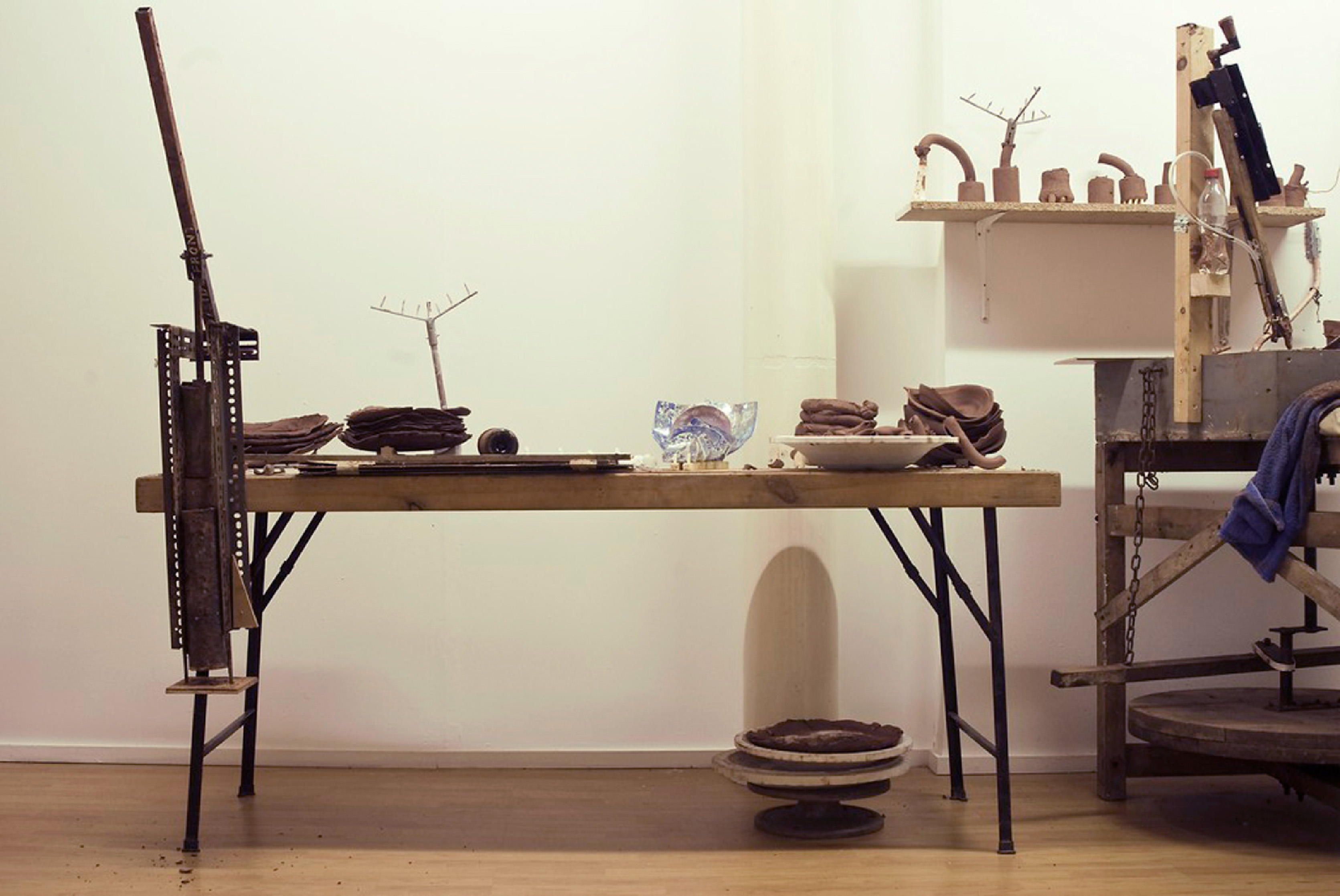 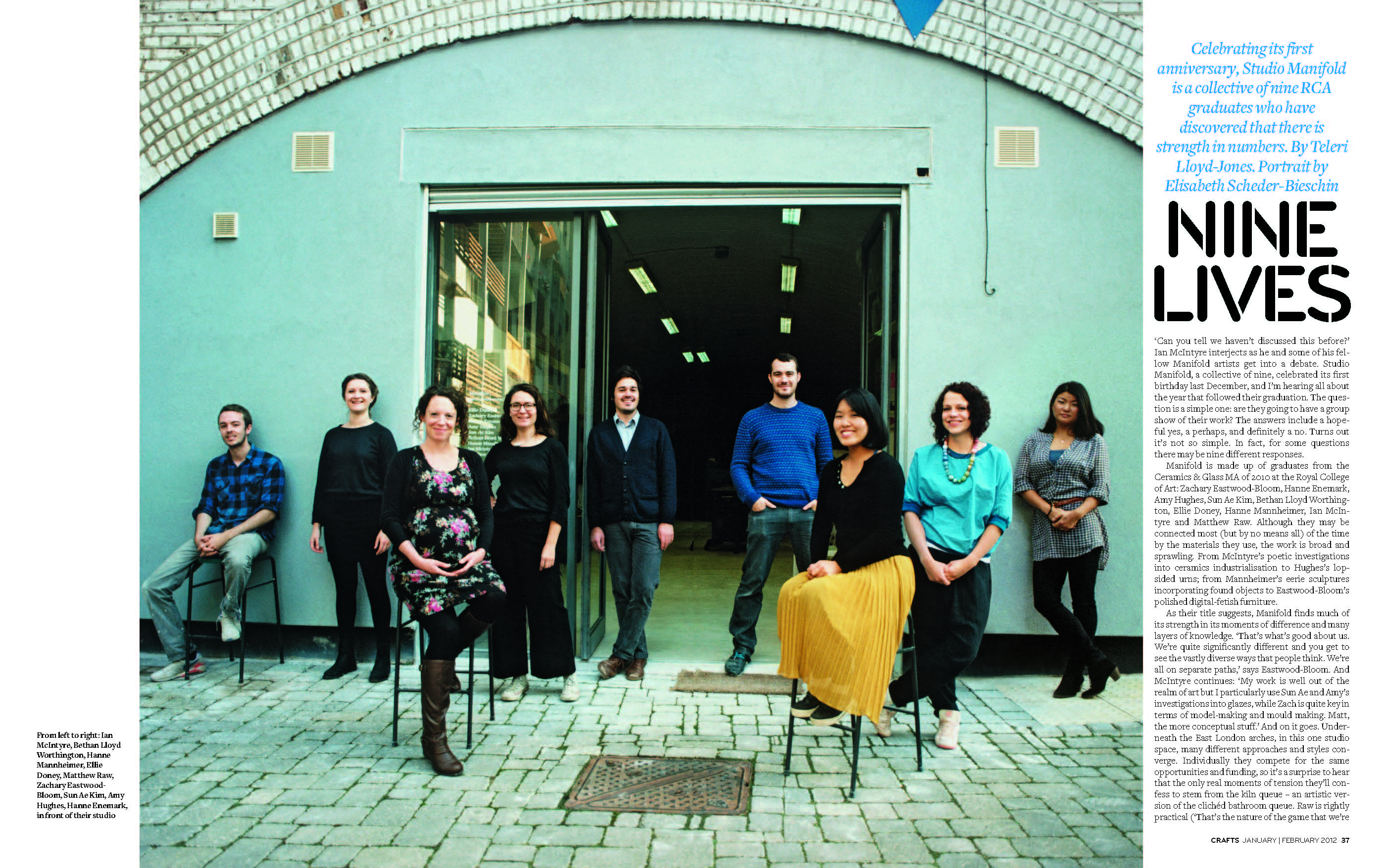